They had been seeing her since the last many months. The little girl would appear unexpectedly on the banks of the river Ganga, which was a favourite play area for many children in the small pilgrim town. She would play with them happily for a few hours in the evening, before going away. She was a beautiful child, but sadly could not speak or hear. The townsfolk could not find out who she was. In this little town, where everyone knew each other, this was something strange.

Though the girl seemed intelligent enough to pick up the games played by the other children, she seemed very different in her demeanour. She just enjoyed playing and had no will to compete or win. Everyday she would reach the bank late afternoon, wait for the other children and would go away as the sun set. The children therefore started calling her Surya (meaning the Sun). 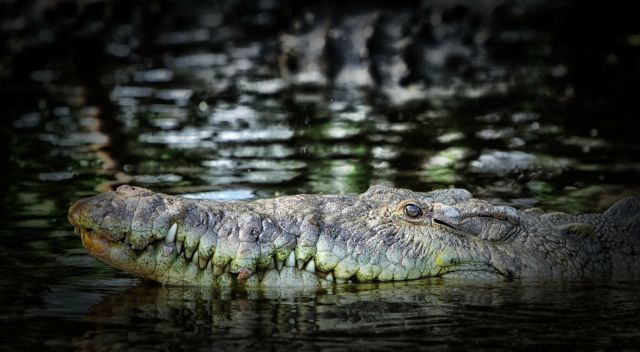 The townspeople always avoided a particular stretch of the river which was known to be home of deadly crocodiles. Many people had lost their lives there and even the boats did not venture into the area. One afternoon, they were shocked to find Surya floating in a basket on the river. The shock turned into horror when they noticed that a crocodile was following her.

She had seen it too, but instead of being scared, she treated the dangerous reptile as another playmate, and was poking it playfully with a twig. She did not pay any attention to the desperate signs from the people who had gathered on the banks of the river.

A few men jumped into a boat with spears to drive away the crocodile and rescue the girl. As soon as the boat neared the reptile, it dived into the water and disappeared. When they turned to pick up the girl, she was not there. Nobody had seen her fall into the water. She had just vanished into thin air.

They never saw Surya again. For a long time, the people in the town discussed no other subject but the mysterious child and who she was. Was she an ordinary human being? A water nymph? Or Mother Ganga herself? Many believed that she was the holy river Ganga playing with her carrier, which is a crocodile as shown in sacred iconography. The story of the little girl became a part of the local lore. Down the ages, in many places similar tales were heard – sometimes of a young girl, an old woman or a child. Different stories of a vulnerable human’s unusual empathy for a dangerous creature (from a python and cobra to alligators and scorpions). Each time, she would disappear after a large number of people had watched the incident.

While all these incidents never failed to shock all those who heard of it even many years later, the message in it a few did understand – that which the world fears and abhors, has its own sacred space. She had always appeared to make mankind understand this truth.

16 thoughts on “A Ganga River Tale”